Turboexpanders coupled to generators can be used to generate clean electricity in many different applications.  Producing up to 15MW of clean electricity, they can also provide the necessary temperature or pressure drop required in certain processes.  The ability to operate efficiently with over 40% liquid by mass at the expander outlet make them viable in applications where the superheated steam conventional turbines require is not available.  They are also highly efficient, with isentropic efficiencies over 90% and extremely reliable, with availability factors approaching 99%. 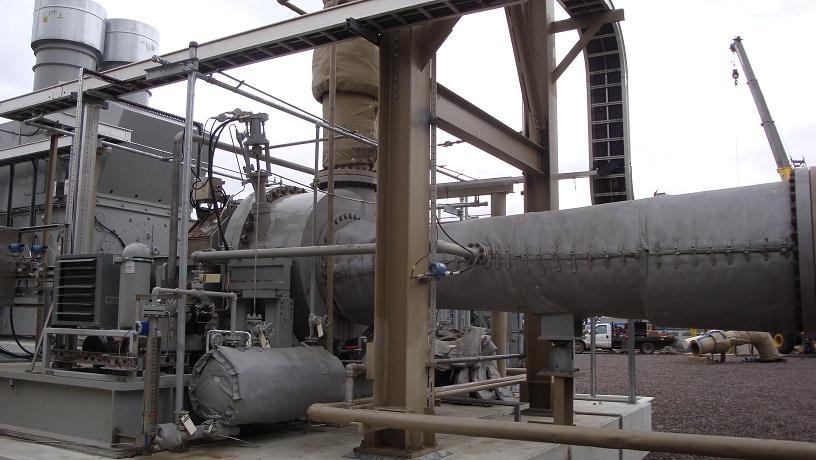 Geothermal energy is a rapidly growing industry as environmental concerns about other power generation techniques capture the attention of governments and the public.  Unlike other renewable energy sources, such as wind and solar, geothermal energy has the advantage of stable operation independent of the time of day or the weather, making it an important part of a well balanced renewable energy portfolio.  The exploration phase for high temperature applications requires much more capital investment and risk, and millions of dollars can be spent investigating a site only to find that it is not hot enough to produce dry steam needed to drive normal axial multi stage turbines.  Low temperature (under 175 degrees Celsius) geothermal sites are much more common than high temperature sites that can produce sufficient quantities of dry steam to drive a conventional turbine or hot brine fluid for the ORC energy recovery.  It is predicted that use of low temperature sites using Binary cycles will increase as demand for geothermal energy increases.

Binary cycles use the hot water from the geothermal well to heat a working fluid such as isobutane via a heat exchanger.  The working fluid is then expanded through a turbine that drives a generator, producing electricity.  A condenser and pump complete the cycle.  Because of the smaller temperature ratios that Binary cycles are used for, little energy is available for expansion before condensation begins.  Thus, radial expansion turbines, which can operate at lower vapor qualities than conventional turbines, are the ideal prime mover in Binary cycle applications.

As turboexpanders don’t require steam to be completely dry during the entire process, they can often extract more work from saturated steam exiting a conventional turbine, increasing a power cycle’s efficiency and reducing the amount of heat rejected to the environment.  They can also be used in a binary cycle (see above) by using the primary cycle working fluid just before it enters a condenser as a heat source.  Whether increasing the efficiency of a power plant or producing electricity as a byproduct of another process that requires heat to be rejected, turboexpanders can be used to harness power that would otherwise be wasted.

When merging pipelines at different pressures or at points in the distribution system where pressure must be reduced, turboexpanders let you recover the energy in the gas that would otherwise be lost when using traditional pressure regulation equipment such as valves or other throttling devices.